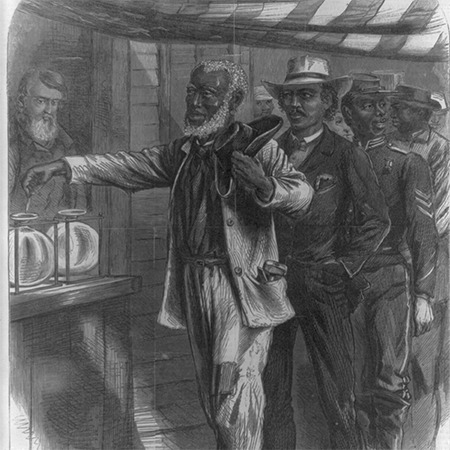 Since the passage of the 15th Amendment to the U.S. Constitution, Black men in counties throughout Delmarva exercised their right to vote. Despite this victory, various discriminatory practices were enacted in southern states to prevent Black citizens from voting.

Early in the 20th century, the Maryland legislature supported several attempts to disenfranchise Black voters by submitting amendments to the Maryland Constitution that would have adopted literacy or poll taxes to block Black voters.

The most concerted disenfranchisement effort involved a proposal written by John Prentiss Poe, the dean of the University of Maryland Law School. The Poe Amendment would have required voters to read, or have read to them, a passage of the Maryland Constitution and then explain its meaning to the poll attendant. The amendment’s “grandfather clause” exempted many white voters from this requirement. In a 1905 state referendum, a coalition of foreign-born citizens, Black voters, and political reformers defeated the Poe Amendment. Two more disenfranchisement efforts also failed to gain the approval of Maryland voters.