“I am not satisfied in making money for myself. I endeavor to provide employment to hundreds of women of my race.”

Born Sarah Breedlove in 1867, in Louisiana, Madam C. J. Walker was the first of her five siblings to be born into freedom. Her parents died, leaving her an orphan at age seven. Sarah eventually made her way to St. Louis where she became a sales agent for African American hair care entrepreneur Annie Malone. Like many African American women at the time, she struggled with hair loss primarily due to the use of caustic lye soap prodcuts. With her knowledge of the business, she developed a formula for herself that was preventative; this was the birth of her Wonderful Hair Grower.

Due to its success on her own hair, Walker began to sell her product door to door, officially starting her business in 1906. She expanded her influence to both the South and Midwest, eventually settling in Indianapolis in 1910 to build her first factory and headquarters for the Madam C.J. Walker Manufacturing Company.

Madam C. J. Walker used her success to became a champion for African American women. She stressed the importance of independence, employing women to sell her product as agents of the company and providing them an income and career. Madam C. J. Walker became one of the first self-made female millionaires. 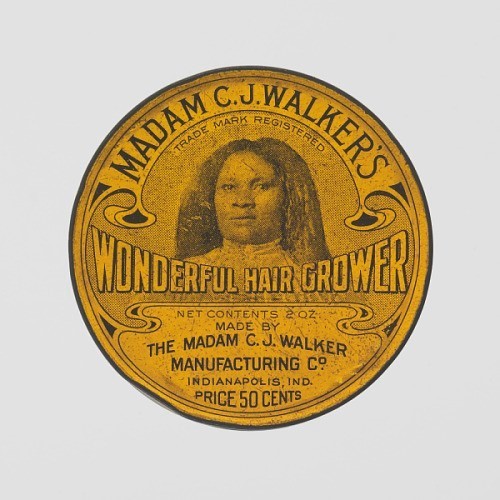 Madam C. J. Walker’s Wonderful Hair Grower with her image on the front of the container, c.1910-1920, Smithsonian National Museum of African American History and Culture.