Portrait of Lydia Pinkham that was used on many of her products and advertising materials, c.1870, Cape Charles Museum.

Lydia Pinkham, born in 1819 in Massachusetts, was an early spokesperson for women’s health and firmly believed that women should have a strong understanding of their anatomy. She was educated and worked as a schoolteacher prior to marrying in 1843. She wrote the book, Yours for Health, which was written for women to understand their bodies; the book was surprisingly accurate by today’s standards. What made her famous was her tonic for the “woman’s weakness” – or what we associate today as symptoms of a woman’s menstrual cycle. This was one of the earlier products made by women for women.

The formula for the tonic was not originally developed by her. A prototype was given to her in a debt settlement. She modified the formula to her liking, and Lydia E. Pinkham’s Vegetable Compound was born. She originally shared it with family and friends, but as more people began to use it, it quickly gained popularity and she soon became a household name. Pinkham used her image and name on her products and her portrait was everywhere. 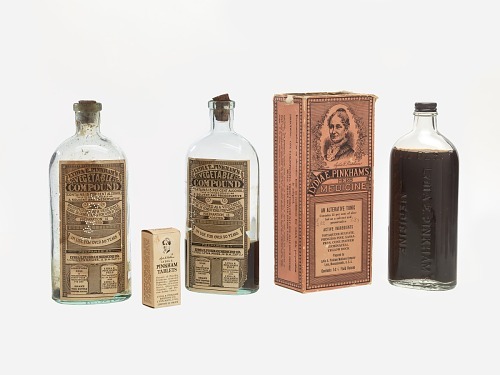