Indigeneity and Climate Change policy in the 21st Century

Speech given by: Tara Houska
Video supplied by: TEDTalks

The use of this image may be subject to the copyright law of the United States (Title 17, United States Code) or to site license or other rights management terms and conditions. The person using the image is liable for any infringement.

File Format is an Audio File from the derived Video recording

Beginning of the speech is an introduction in Ojibwe by Tara Houska. The rest of the Audio is in English.

[Ojibwe: Hello. My English name is Tara; my Native name is Zhaabowekwe. I am of Couchiching First Nation; my clan is bear. I was born under the Maple Sapping Moon.]
My name is Tara Houska, I'm bear clan from Couchiching First Nation, I was born under the Maple Sapping Moon in International Falls, Minnesota, and I'm happy to be here with all of you.
Trauma of indigenous peoples has trickled through the generations. Centuries of oppression, of isolation, of invisibility, have led to a muddled understanding of who we are today. In 2017, we face this mixture of Indians in headdresses going across the plains but also the drunk sitting on a porch somewhere you never heard of, living off government handouts and casino money.
It's really, really hard. It's very, very difficult to be in these shoes, to stand here as a product of genocide survival, of genocide. We face this constant barrage of unteaching the accepted narrative. 87 percent of references in textbooks, children's textbooks, to Native Americans are pre-1900s. Only half of the US states mention more than a single tribe, and just four states mention the boarding-school era, the era that was responsible for my grandmother and her brothers and sisters having their language and culture beaten out of them. When you aren't viewed as real people, it's a lot easier to run over your rights.
Four years ago, I moved to Washington, DC. I had finished school and I was there to be a tribal attorney and represent tribes across the nation, representing on the Hill, and I saw immediately why racist imagery matters. I moved there during football season, of all times. And so it was the daily slew of Indian heads and this "redskin" slur everywhere, while my job was going up on the Hill and trying to lobby for hospitals, for funding for schools, for basic government services, and being told again and again that Indian people were incapable of managing our own affairs. When you aren't viewed as real people, it's a lot easier to run over your rights.
And last August, I went out to Standing Rock Sioux Reservation. I saw resistance happening. We were standing up. There were youth that had run 2,000 miles from Cannonball, North Dakota all the way out to Washington, DC, with a message for President Obama: "Please intervene. Please do something. Help us." And I went out, and I heard the call, and so did thousands of people around the world.
Why did this resonate with so many people? Indigenous peoples are impacted first and worst by climate change. We are impacted first and worst by the fossil-fuel industry. Here in Louisiana, the first US climate change refugees exist. They are Native people being pushed off their homelands from rising sea levels. That's our reality, that's what we live. And with these projects comes a slew of human costs that people don't think about: thousands of workers influxing to build these pipelines, to build and extract from the earth, bringing crime and sex trafficking and violence with them. Missing and murdered indigenous women in Canada has become so significant it's spawned a movement and a national inquiry. Thousands of Native women who have disappeared, who have been murdered. And here in the US, we don't even track that. We are instead left with an understanding that our Supreme Court, the United States Supreme Court, stripped us, in 1978, of the right to prosecute at the same rate as anywhere else in the United States. So as a non-Native person you can walk onto a reservation and rape someone and that tribe is without the same level of prosecutorial ability as everywhere else, and the Federal Government declines these cases 40 percent of the time. It used to be 76 percent of the time. One in three Native women are raped in her lifetime. One in three.
But in Standing Rock, you could feel the energy in the air. You could feel the resistance happening. People were standing and saying, "No more. Enough is enough. We will put our bodies in front of the machines to stop this project from happening. Our lives matter. Our children's lives matter." And thousands of allies came to stand with us from around the world. It was incredible, it was incredible to stand together, united as one.

Original Format is a Video recording.

Original Format is a 10 minute and 56 second video recording.
This Audio file and transcript contains 5 minutes and 7 seconds of the original format 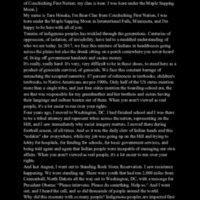 Native Americans Then and Now